The majority of the food you see on TV cooking shows ends up in the bin and totally wasted. Why?!

According to one waste management company, that sets a terrible example to the rest of us and we need to put a (saucepan) lid on it.

UK food waste management company BusinessWaste.co.uk is appalled by the volume of food being wasted to provide TV entertainment, especially while there are people living on foodbanks.

Company spokesman Mark Hall says, “We have families who rely on donations at their local food banks to survive, yet if they turn on a telly they can see plates of food being created which are destined for the bin.”

“It should be illegal for cooking shows to waste food while we have people starving up and down the country.”

TV programmes such as Masterchef, The Great British Bake Off and Saturday Kitchen are among some of the most watched shows in the UK, but as viewers watch lavish dishes being made, they are often unaware that much of it is destined for the bin.

But as approximately 1.6 million people were reported to have used a food bank in 2019, it seems ridiculous to think how much extra food is being wasted due to cooking shows, especially considering that 9.5million tonnes of UK food waste was binned in 2018. 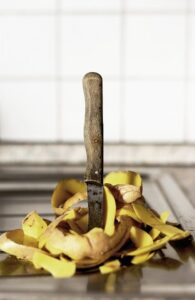 Hall: “Seeing all the food waste being created has left a bad taste in my mouth, food should not be allowed to be wasted when we have people starving”.

Plates of food end up being sat out for hours under warm stage lighting during filming to the point that it becomes inedible, so due to health and safety it often gets thrown away.

This is why BusinessWaste.co.uk wants food waste created by entertainment programmes to be made illegal.

Hall: “More needs to be done to reduce the amount of food unnecessarily going in the bin, so by tightening up rules and regulations it should make shows think about how to deal with the food produced”.

Some programmes such as Masterchef have already released statements about their food waste policies, highlighting that they only order the amount of food necessary and try to reuse ingredients or donate leftovers to nearby charities and food banks.

And if rumours are to be believed, leftovers from The Great British Bake Off often find their way into the bellies of Prue Leith’s neighbours’ pigs.

Hall: “We appreciate that some efforts have been made to reduce waste, but there is always more that can be done – and making TV food waste illegal will ensure no food gets thrown away”.

Along with making TV food waste illegal, Business Waste are also advocating for producers to consider the carbon footprint created by sourcing ingredients for each programme.

Transporting produce such as out-of-season berries accounts for 11% of the UK’s food travel emissions, which can be easily reduced by using locally sourced in-season food.

“There’s definitely a problem when all the ingredients sourced for one plate of food has travelled enough miles to cover the Earth just to create one meal for the screen,” says company spokesman Mark Hall.

“It’s not a sustainable way to cook, so producers need to look more at locally sourced ingredients that have been sustainably sourced.”

Cooking in the age of Covid

2021 has thrown an extra spanner in the works with TV food waste, as during the Covid-19 pandemic many shows are having to throw more away due to safety measures put in place.

“Many programmes are now running on a skeleton-crew, which means there are fewer people on set to scoff up the leftovers,” says Hall.

It has also been reported that in some cases, bosses aren’t allowing the food to be shared out due to social distancing measures and fears of contamination.

Hall: “Food has been particularly scarce this year as it is, and many more people are finding themselves in dire straits trying to put food on the table for their families, so it’s essential that we make waste from these entertainment programmes illegal.

“Maybe it’s time to ditch the cooking shows altogether, especially in a time like this when food is hard enough to find on the supermarket shelves.”

Only 34% of families cook a meal from scratch each week

How to arrange food waste collections

What is anaerobic digestion?